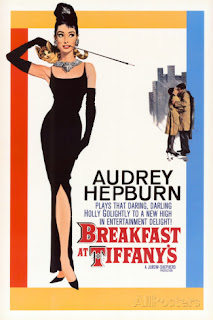 Aspiring writer Paul Varjak (George Peppard, twenty years before The A-Team) moves into an Upper East Side brownstone inhabited by an array of colourful residents. He becomes enamoured of 'socialite' Holly Golightly (Audrey Hepburn, expertly playing a clotheshorse), who invites him to a wild party packed full of grotesques with improbable names. Paul realizes that he's in love with Holly, but she's determined to marry one of the richer partygoers. Holly and Paul run around doing crazy things. She won't admit that she really loves him, and plans to escape to South America. But everything turns out well in the end. Rival suitors fall off the page. Paul is inspired to write. It rains. The hunt for Holly's cat catalyzes a romantic finale. They look into one another's eyes. They embrace.

Authors are rarely shown writing on film. Instead, directors employ various cinematic clichés to emphasize the author's craft. Typewriters and neat stacks of foolscap are good. Or an author filmed from below, tie disarranged, leaning back in his chair, hands behind his head, staring at the ceiling. And then there's the library, the author's second home.

Holly brings Paul to Tiffany's; he brings her to the New York Public Library. His sudden confidence, in an otherwise hesitant, sensitive performance, embeds him in the literary world. The scene is key to making us believe that two such different people can exist as a couple. Holly encourages Paul's wild side and Paul encourages her sober side. Together against the system (a frumpy librarian, who multiply shushes them), they act like giddy teenagers. Holly does confess, however, that she doesn't find the library half as much fun as Tiffany's. 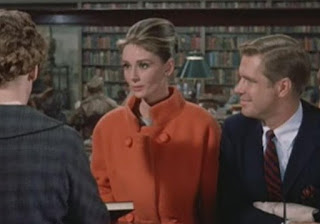 The New York Public Library's beaux-arts Main Branch building has provided a memorable location for many films - though we only see five seconds of the outside here, the interior being a mocked-up studio. The same is true of Ghostbusters - the interior shots were filmed 3,000 miles away (in a branch of the Los Angeles Public Library) from the exterior ones. The destruction of the Library in Escape from New York and The Day After Tomorrow provides a simple visual metaphor for the dystopian city. The Library provides a stand-in for the Metropolitan Museum of Modern Art in the (terrible) remake of The Thomas Crown Affair. I understand that the Library also features in Sex and the City: The Movie. I doubt that I'll ever be able to confirm this.

Despite the iconic outdoor photography and the odd witty line lifted from Capote's novella, this film is a tragedy. A tragedy because it has been purged of all the poignancy and subversion of the original (itself an imperfect fiction - most of Capote's characters are caricatures). A tragedy because Marilyn Monroe was intended to play Holly Golightly in a role that seems to have been written for her. A tragedy because it shows George Peppard on the cusp of becoming one of Hollywood's leading men before he was destroyed by his anger and his love of the bottle. And a tragedy, finally, because I don't really have the courage of my convictions - the final scene, with the cat, in the rain, I find tender and romantic despite my best efforts to avoid being manipulated.