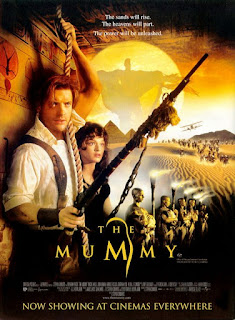 In the 1920s, a ragtag bunch of treasure-hunters, deserters, unscrupulous Americans and bumbling Englishmen begin excavating the long-lost Egyptian City of the Dead. Chunky Foreign Legionnaire Rick O'Connell (Brendan Fraser) and his love interest Evelyn Carnahan (Rachel Weisz) accidentally awaken a very cross mummy, the high-priest Imhotep. Chaos ensues, with Imhotep slowly regenerating from an ugly computer graphic into a lusty Ancient Egyptian as he kills each member of the excavation team in turn. Believing our hero's girl to be his long-dead lover, the stage is set for a showdown...

Librarians the world over delight in the character of Evie Carnahan. Why? Because she's sexy and clever? Because she's an intellectual counterpoint to He-Man Fraser? Or because she speaks the line 'Look, I... I may not be an explorer, or an adventurer, or a treasure-seeker, or a gunfighter, Mr O'Connell, but I am proud of what I am... I... am a librarian!'

Unfortunately, The Mummy's library and librarian are sad stereotypes. The library is dusty, stuffed full of books with faux antiquarian bindings. The librarian is clumsy, and her chief hobby? Reading! She is given sex-appeal only when taken out of the library, when her glasses are removed, and when she plays the damsel-in-distress next to a large barrel-chested man. Is this irony, or just plain old misogyny?

Like many late-nineties cultural productions, The Mummy it is suffused with inconsequential irony, but this slapstick knowingness drives it even further into the nonsensical. It made a squillion dollars, and inevitably, spawned two sequels. By the third film, the cinemagoing public finally realized how hollow the thrice-repeated plot was. Unfortunately, another trilogy is planned. Weisz, the smart Cambridge graduate, bailed after the second film. Fraser, who can (but rarely does) do so much better, looks like he'll be fighting mummies for the rest of his career.