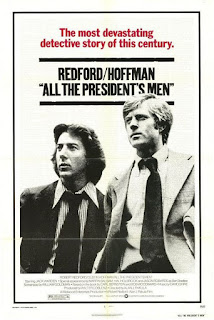 Crusading journalists Bob Woodward (Robert Redford) and Carl Bernstein (Dustin Hoffman) follow the trail of crumbs which leads from the Watergate building all the way to the Oval Office.

Step by step by step they get there. Phonecall by phonecall. Might the White House library be able to connect the bungling burglars to the President's men? A middle-aged woman answers Bernstein's call, and volunteers useful information. But someone gets to her. She puts him and hold, and when she returns she's a muddle of contradiction and nervous silences. Woodward tells Bernstein: 'We gotta get something on paper!' Bernstein replies: 'Library of Congress!'

In the Library's Beaux-Arts Jefferson Building, the reporters ask for list of books recently sent to the White House. A smarmy, middle-aged, male librarian in a dusty office delights in telling them they can't have it. Says Woodward to Bernstein: 'We need a sympathetic face.' Bernstein to Woodward: 'We're not going to find one here.'

Then, for our counter-culture heroes, what better co-incidence than the appearance of a hip, young, black librarian in a bright room. 'I'm not sure you want it, but I got it,' he tells them, as though trading something illegal (which of course, he is). They retire to the Reading Room, and in a grand but poorly executed shot, the camera wobbles all the way from their desk to the top of the high dome. But nothing helpful can be found among the circulation tickets. The nefarious librarian-silencer has got to the slips too.

The Library of Congress scenes are one of the film's most interesting interludes, in which Pakula's journeyman direction is revealed as skill and alacrity. These couple of minutes trade on stereotypes, but also undermine them, and swing between opposites - effusive helpfulness to silence, darkness to light, floor to ceiling, step-bounding expectation of success to the hasty exit of failure. All of these dichotomies spin on the idea and fact of the library, storehouse of both knowledge and myth. In contrast to the phone-hopping and peppy newsroom dialogue of the preceding scenes, few words are spoken. The Library of Congress offers an excuse for this silence. The artificiality of the segue into Woodward's first contact with the notorious Deep Throat thus seems less contrived. The library contrasts also provide a metaphor for the odd marriage that is Woodward and Bernstein - one a tidy WASP, the other a beatnik Jew, one the navy lieutenant, the other the child of communists.

The world's largest, most well-funded, and most important library, the Library of Congress has rarely featured in cinema, despite the grandiose classical facade of the Jefferson Building, its elaborate Great Hall, and the immense Reading Room. Perhaps the Library authorities don't want to disrupt the scholars and Congressional aides, or perhaps there simply aren't that many political thrillers that require a library visit to support the plot. Pakula shies away from filming its iconic spaces here (perversely contrarian, the Reading Room scene refrains from showing us the dome altogether, as though the camera rises into it simply to avoid seeing it). Rushing through the light-skinned corridors of political and bibliographical power, the appearance of a black librarian, an oddity in an overly white profession, is another satisfying subversion. The whiteness of contemporary librarianship is one of its most glaring failures, though African-American librarianship has a long tradition, there are fewer black librarians than there are librarians of other minorities. It would be good to know why.