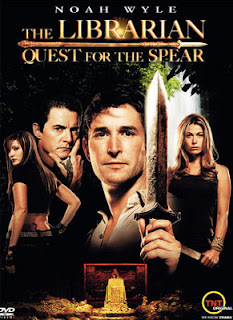 Overachieving perpetual student Flynn Carson (Noah Wyle) is hired as "The Librarian" by the mysterious Metropolitan Public Library. The Library holds various mystical treasures, one of which, the Spear of Destiny, is stolen by a gang of kung-fu heavies. Flynn sets off to the Amazon in pursuit of the spear, and the gang leader.

This film is about a librarian. He's a kind of a superhero. Enough said!

While pandering to the idea that librarians are passive, shy, and antisocial, the three The Librarian films also play with positive views of the library and librarian. The librarian as quick-witted brainbox and guardian of wisdom; the library as storehouse of myth.

The library of Alexandria once held the Spear of Destiny, the implement that pierced the side of Christ on the cross. It is now guarded by the Metropolitan Public Library, fixing the institution's allegiance to Judeo-Christian culture, but also to the Roman Empire, in whose service the spear was made. The spear has passed through the hands of a roll-call of ambiguous European rulers (Charlemagne, Napoleon, though much less ambiguously, Hitler). Now missing, it must be rescued from South America, and finally the Himalayas, by a librarian with a recent doctorate in Egyptology. Old World, New World, the Oriental Other, good and evil – the library binds them all together. It is the timeless world institution par excellence.

And Flynn Carson is the librarian we all want to be. Look – he's a librarian who kicks ass! He has twenty-two degrees, spends too much time reading, has trouble with women, and still lives with his mother. But he saves the world. There’s something of Frodo about him – plucked from obscurity on a quest for an object that only he can be trusted to handle.

He has four colleagues. His bodyguard/assistant Nicole Noone, a charmingly misanthropic, machete-wielding adventuress, whose face, we are told, is a perfect expression of the golden mean (though she is no ordinary Hollywood beauty). Library administrator Charlene, with her power-suit, her ballroom office, her firmness and efficiency… her three cats. Judson, himself The Librarian in the distant past, world-weary and innocuous, but also a seventy-something judo-master and ex-Marine. And the film’s baddie, played by a wooden Kyle MacLachan, Flynn’s predecessor as The Librarian, who now wants to rule the world. The film makes librarians the objects of fun, but what fun this cast of librarians is.

The Librarian is escapist, silly fluff, but its lightheartedness and tongue-in-cheek playfulness make it great Sunday afternoon material. Bob Newhart, who plays Judson, is famously one of America's finest deadpan comics, but to those who only know Wyle as ER's troubled heartthrob, his genius for slapstick will be a revelation. There are two sequels, less satisfactory, as they no longer toy with Flynn’s entry into the profession. But no other movies so clearly show that, in Flynn Carson’s words 'being a librarian is actually a pretty cool job.'