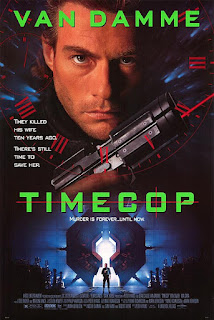 Here's a piece of movie trivia for you... not one of Jean-Claude van Damme's (so far, 42) films features a library or librarian. So what? you might be thinking. Well, firstly, as this blog attempts to demonstrate, libraries and librarians have roles in many films, so the absence of one in van Damme's oeuvre is statistically unlikely. Secondly, the librarian as action hero is an obvious cinematic joke (see my post about The Librarian). In the awful Demolition Man, which van Damme turned down, Sandra Bullock tells a reanimated Sylvester Stallone (an oxymoron?) about the Arnold Schwarzenegger Presidential Library. The idea of Schwarzenegger as librarian is toyed with by Al Jankovic in UHF. Jet Li actually plays a librarian in Black Mask. 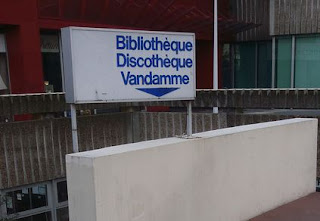 But van Damme is a different kind of action hero. Unlike Schwarzenegger, he cannot act (it's rarely noticed, but Schwarzenegger can act, within a limited range). Unlike Stallone, he is not a big man (5'9", like me). He plays an everyman more often than other action heroes, (though never during the arrogant bluster of his cocaine-fueled years (1993-98), the subject of introspection in JCVD). The librarian joke would fall flat.

In any case, there's no need to make jokes about van Damme and libraries, because... look! There's already a van Damme library in Paris!

And Timecop? In this slick sci-fi entertainment, his wife is played by Mia Sara, the love interest for alcoholic librarian Ned Beatty in thriller Shadows in the Storm. Tenuous, I know, but I needed to maintain the format...
Posted by Colin at 19:49