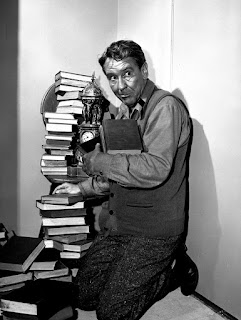 Let's be honest, there are some creepy people working in libraries. No surprise then that there's a Twilight Zone episode with a librarian as the main character. In final episode of the second series, the very uncreepy, and very excellent, Burgess Meredith plays 'The Obsolete Man,' a librarian condemned to death in a dystopic totalitarian state. In a teleplay that echoes both The Trial and Nineteen Eighty-Four, Meredith meets his end with forbearance, stoicism and resignation (traits of the librarian?) while, oddly for his profession, criticizing the State for being practitioners of indexing and classification.

Meredith's quietly brilliant performance (half Kansas farmer, half pious everyman) complements some sharp writing in an otherwise hokey script. In his strangely compelling judgement, a servant of the State condemns the librarian as 'a dealer in books and two-cent fines and pamphlets and closed stacks and the musty insides of a language factory that spews out meaningless words on an assembly line; words... that have no substance, no dimension, like air, like the wind, like a vacuum that you make believe has an existence by scribbling index numbers on little cards.' This librarian-hater is himself condemned at the episode's end; torn to pieces by some overzealous citizens who look like demented escapees from a Broadway dance troupe. A lesson to enemies of the library everywhere.
Posted by Colin at 20:49