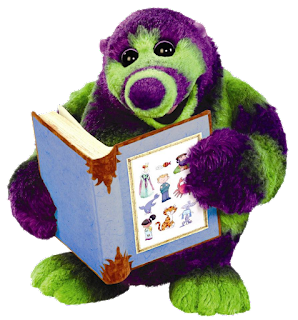 There aren't many librarians on children's television. But the BBC's The Fimbles was no ordinary show. The Fimbles - Fimbo, Florrie, and Baby Pom, looked like large-nosed woolly skittles. They lived in a psychedelic dream world called Fimble Valley. Among their friends are a noisy and flippant frog called Rockit, a spherical pink bird called Bessie, and a Welsh green and purple mole called Roly Mo.

Roly is a tidy, conscientious, intellectual counterpoint to the dreamy and messy Fimbles. In each episode, he tells them a story from his subterranean library, the best of which combine the crypto-communist subversion of Sesame Street with light-hearted, nonsensical plots beloved of earlier BBC shows like The Teletubbies and Bill and Ben. The stories are always preceded with a lullaby to Roly's love of books - "When you take a look, inside a book / Who knows what you might see / When you take a look, inside a book, it's fun as fun can be..."

Despite the heaving shelves, Roly always seems to read from the same book. This might have something to do with his absentmindedness. After The Fimbles ended, Roly got his own show, but fame didn't suit him. He stopped rolling, his stories became repetitive, and the show was cancelled after a year.

The copyright enforcers at the BBC make sure that uncontrolled excerpts from The Fimbles and The Roly Mo Show don't make it onto the internet for long. Yet they have left one of the most amazing pieces of "found" modern art you're likely to encounter, a propinquitous miracle of breakbeat, a television, and a small child. Give it 35 seconds, then enjoy.
Posted by Colin at 13:10