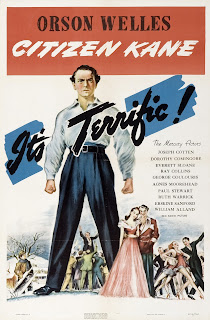 Filthy rich media-mogul Charles Foster Kane dies. Reporters comb his eventful and controversial life in an effort to find the meaning behind his last word - Rosebud.

Citizen Kane stitches together a contemporary story with self-referential flashbacks in a series of contradictory episodes whose ambition is matched by their technical brilliance. In the second of five attempts to discover the identity of Rosebud, reporter Jerry Thompson (William Alland) visits the "Thatcher Memorial Library" to review the unpublished memoirs of Kane's former guardian. A stern librarian (Georgia Backus) leads Thompson into a mausoleum-like reading room, arranges for him to view the manuscript, and gives strict instructions on which pages he may view.

The library has no visible shelves. The manuscript is stored in a safe. The librarian is perhaps the most severe representation of the profession ever projected onto a cinema screen. Unsurprisingly, library writers have denounced the scene. Phrases such as "the world's meanest archivist" and "a typically negative view of librarians" pepper online discussions. A blogger has written: "I watched Citizen Kane for the first time with a librarian and she was quick to point out how librarians are erroneously depicted in popular culture."

I think that the issue-desk critics have missed the point. They have overlooked Welles' subversiveness and his expressionistic filmmaking. They have ignored the fact that, unlike the librarian encountered by Woodward and Bernstein, Backus grants access to the library's most treasured document under the same conditions that every good librarian would impose. The reporter is watched, and his time with the manuscript is limited - yet he is allowed to read it.

Secondly, and remarkably, Backus is untypical of other screen librarians because she plays the character as a lesbian (David Lugowski uses her performance as a launchpad to "queer" the entire film). She is not the enbunned, horn-rimmed, cardigan wearing Plain Jane of librarians' ire. She is masculine, strong, and domineering, with an Annie Lennox dress-sense forty years before the Eurythmics. She is in charge of her collection, and in control of the situation. She is an empowering and emancipatory figure. She is mean, but you have to be a little mean to be a good librarian.

Thirdly, and most importantly, the library is not a meant to be understood as a library at all. It's a deliberately indicated episode in a movie (note the silhouette of the camera lens on the closing library door). Negotiating the borders between drama, melodrama, and parody, Citizen Kane doesn't need any of the associations a real library would bring - it needs a room in which a book can be opened. It doesn't need a sultry blonde to distract the camera, nor a spinster for the audience to snigger at. The vault, the library's thick walls, and the librarian's strictness all point to an act of uncovering, and the audacity of Gregg Toland's lighting tricks us into expecting a revelation. The empty table and the blank room are used as tabulae rasae to set up the flashback.