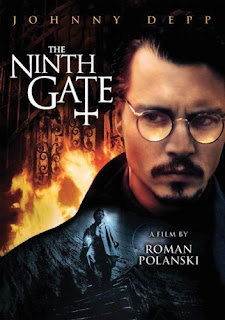 What exactly does double-dealing antiquarian bookseller Johnny Depp do with his ill-gotten gains? He claims to be interested in nothing but money, but wears only one outfit, drives no car, and has a small, badly-furnished New York apartment. He can't spend that much on cigarettes and whiskey, can he?

Is he aware of the discontinuity? Is he having an existential crisis? Is that why, wandering over Iberia and France viewing private libraries, he allows himself to be ravished, first by a Satanist widow, and then by a witch? Is this meant to be a veiled critique of private property, of sex-relations, or consumerism, disguised as a sub-Dan Brown suspense thriller? Am I missing something?

How does Depp know so much about rare books anyway? I can't count how many times he rattles off something like '...the 1578 London copy of Magister Alphonsus, with woodcuts by Jacob Heisenfeld... and tooling by a Maastricht craftsman, presumably Stefan d'Agincourt....' Oh, I see Mr Polanski, Johnny knows this stuff because he flicks through old books listening to the sound the pages make. Because that's what rare books specialists do.

The saddest thing for a librarian is the obvious care taken in the gathering of genuinely rare books for the camera, only for their interesting features to be abused, as the careful dialogue is also debased, by a director's slow deconstruction of his own premise, and an absurd denouement. 'Mumbo jumbo, mumbo jumbo, MUMBO JUMBO' booms Frank Langella as he crashes a storybook Satanic ritual (Latin chants, black capes, high ceilings), before attempting to raise part-time book-engraver Lucifer. Yes Frank, it most certainly is.
Posted by Colin at 19:26