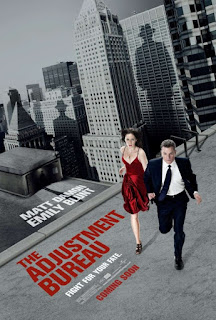 There's no such thing as free will. Trilby-wearing men with Moleskine notebooks that double as iPads tinker with reality to keep us to a preordained plan. Matt Damon runs around a lot. Emily Blunt looks languorous in a variety of cocktail dresses. Not even the Adjustment Bureau can ward off this Hegelian dialectic. True love is stronger than ersatz fate.

The great Argentine writer, hoaxer, and modernist Jorge Luis Borges famously compared paradise to 'a kind of library.' I think he would have liked this film of doors transformed into spatial gateways, retro fashion meeting high-end technology, and angels in raincoats. If you've read enough of his stories you could, for a while, imagine that this film was based upon one. But it's too linear to be by Borges. So if you've read enough of his stories, you know this could only be based on something by Philip K. Dick.

As a bibliophile and librarian, as a playful author and a man who didn't like straight answers, Borges would have delighted in the idea of angels - who may not be angels - headquartered in a building which resembles a library. Most of it is a library, but good art direction adjusts the filming locations as much as the angels adjust our heroes' lives, and dizzying chases are designed to confuse us in any case. Adjustment Bureau HQ is recognizably the New York Public Library, and not only the reading rooms - many of the corridors, staircases and doors which have never appeared on screen before also belong to the NYPL Main Branch on Fifth Avenue.

I've written about the NYPL on this blog before, in a post about Breakfast at Tiffany's. I mentioned half-a-dozen other films I knew had been filmed there, not realizing that there were at least two dozen more, as well as lots of TV shows I've never heard of (the library maintains a list here). As New York is the most filmed city on the planet, it's hardly surprising that the NYPL is the world's most filmed library. But who knew, or who remembered, that such greats as Network and such wastes of celluloid as Sliver featured the library too? And why did nobody ever tell me about the library-specific division of the NYPD? This branch of New York's finest get to kick ass and eat donuts... in the library! - a maladjusted librarian's dream (not mine, I hasten to add). Lots of ammunition for future blog posts. I ought to thank the hard-working film scouts, or perhaps the evil Michael Bloomberg, who seems determined to starve the great institution of funds, forcing them to go to Hollywood with a begging bowl.

George Nolfi does the uncanny quite well, especially for a first-time director. But it took me a while realize what was so wrong with the library he depicts. It is missing two significant kinds of object. The Reading Room has no books. Neither the Reading Room nor the Plan Room (where the lives of those of us living in the sublunary world are mapped out in giant white folios) have any librarians. The library seems to have been chosen as a filming location entirely for its non-book aesthetic.

There is nothing wrong with this of course. The angels don't look like they have any leisure time, so they wouldn't need to have the latest Stephen King on the shelves in any case. Nor, given the NYPL's wonderful research collections, would they need to order up an obscure monograph from the stacks, since they already have everything they need on their Moleskine iPads. As for librarians, heaven is probably too well organized to need them, especially with Terence Stamp in charge. I, for one, hope that heaven isn't too much like a library. It would feel too much like work. But I am hoping that it might be a little bit like New York.