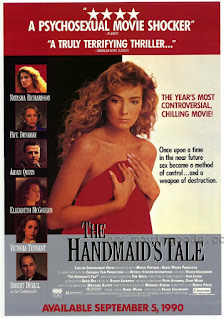 The Handmaid's Tale is a very bad film, which looks as though it's been directed by some well-meaning chimpanzees who have blagged their way into film school. Its profoundly cheap vision of the future involves dressing paramilitary police in black and giving them (black) visors, while making the stars look like they're performing in an afternoon soap-opera, which is about as unworldly as you can get. Perhaps the plot - environmental disaster; a plague of infertility; civil discontent; rightwing dictatorship; blacks, homos and pinkos deported; nubile women concubined - is the kind of thing that works in a novel. But the film makes it seem so silly that I can't imagine it turning out much better in the book (which I haven't read).

Miranda Richardson is one of the sex slaves, Robert Duvall one of the men-in-black, Faye Dunaway his infertile wife, Aidan Quinn their trusted chauffeur and man-at-arms. The second tries to impregnate the first so that the third can adopt the resulting baby. The third gets jealous of the first, who gets frisky with the second, and then starts an affair with the fourth. Your classic love quadrangle, all colour-coded so it's easy to follow (Dunaway always wears blue, Richardson red).

Duvall thinks he can win Richardson over with illegal copies of Cosmo and games of scrabble. But she still hates his guts, and she keeps winning! Why? Because before the sex-slave stuff she was a librarian! Does this advance the plot in any way? What plot? Oh yes, the good guys against the bad guys, which how it turns out in the end, with a voice-over lifted from The Terminator, and Richardson pregnant and safe in a caravan in the wild, rebel-held mountains. How did the rebels get a caravan up a mountain? One among many many questions.
Posted by Colin at 23:16