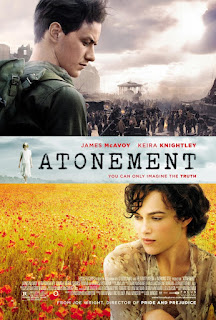 Upper-class schoolgirl Briony (Saoirse Ronan) misunderstands a series of encounters between her sister Cecilia (Keira Knightley) and a servant's son (James McAvoy). In her jealousy and confusion, she tells a lie, which leads to the crushing of all three lives during the early years of the Second World War.

What is it about sex and libraries?

Serial controversialist Professor Mary Beard would have us believe that sex in libraries is an almost everyday occurrence. I once attended a conference where both keynote speakers seemed obsessed with sexual activity in their libraries. Being librarians, they were too polite to say the S word - the first referred to 'hanky-panky,' the second 'nocturnal activities on library beanbags.'

Atonement tops Entertainment Weekly's list of 18 Wild Trips to the Library. The piece begins: 'A sex scene in a library that is scorching hot? It seems so wrong - and it is - but it's also amazing.' The bad writing hints at the journalistic poverty to follow. Among the other 17 'wild' films are Lorenzo's Oil, A Beautiful Mind and Disney's Beauty and the Beast. The list leaves out the only other film I know of to feature a library sex scene - Kevin Bacon's Loverboy.

If libraries are places of quiet and order, sexual activity is an obvious transgression. The first playwrights knew that transgression had dramatic potential, and our literary inheritance primes us to expect tragedy to follow infringements of regulated activities and spaces. As a classicist, Beard knows this - as she knows that the dramatic presentation of Oedipus bonking his mother drew huge audiences to the Athenian theatre, and that library licentiousness will draw readers to her blog. Atonement's director Joe Wright also knows about hubris, and this association partly explains Cecilia and Robbie's tryst as the turning-point of the film. Wishing for the impossible may also partly explain the 'sexy librarian' archetype of popular culture and advertising campaigns, one that Knightley herself seems keen to manipulate, both in her poster for the American Library Association's 'Read' campaign, and in a recent fashion shoot for Italian Vogue.

Like some zany version of Cluedo, a transgressive act, by a sexy girl, in a gentleman's library, seems to have occurred in Agatha Christie's 1942 novel The Body in the Library too (filmed in two televisual adaptations, in 1984 and 2004). A blonde is found in Colonel Bantry's library. The villagers of St Mary Mead gossip about the girl's state of undress, and what it might mean. But Christie was a postmodernist ahead of her time. Like Knightley, the girl is actually wearing a satin evening gown. She died, the prurient village doctor tells us, virgo intacta. She's not even blonde and in the end, she's not who we think she is. Christie gently mocks village attitudes, the absurdities of class, and her own use of the private libraries of murderers great and good. Her foreword reveals that the novel is a conscious parody of the detective genre. 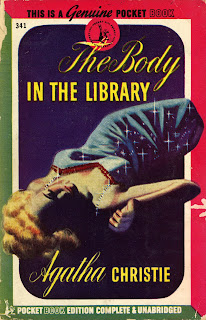 Christie was toying with opposites - the body and the library are improbable compliments, as are the village and its countless murderers, the sweet old lady and the detective. Christie has fun undermining her own genre, softly mocking her life's work, her readers, and her previous use of libraries. The library is the natural end of a detective story between the wars, not the start of one. The various would-be murderers are gathered and arranged like the books on the shelves. The quirky sleuth picks out the villain through an act of weeding, cataloguing, collection management - Miss Marple is a glorified librarian.

Atonement handles the transgressive confluence of the upper classes, libraries and transgression awkwardly. The library scene is successful in conveying a mood rather than advancing the plot. It is remarkable for its artificiality in an otherwise naturalistic film. For a film in which two lovers are kept apart by class, it doesn't use the library in the interesting ways that the space invites. Robbie, defying the role he was born into, has just returned from Cambridge, but this is hardly alluded to. 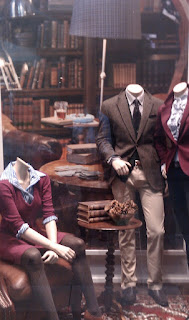 Atonement uses the library as filmatic wallpaper, trading on various cultural associations old and new. It focuses on the heavy petting and leaves the heavy lifting and subversion to the echoes of Christie's libraries. In doing so, it misses a trick. For the upper classes in Christie's books, the library is an extravagance, and nobody ever seems to take a book off the shelves. Books were costly objects in the nineteenth-century world that so many of her characters inherited. In 1851 the average house servant earned just over £24 pounds annually. At the end of that decade the cloth-bound edition of Darwin's Origin of Species was published at 15 shillings, more than one of those servants earned in a week. The upper classes filled rooms full of expensive books they never read because they could. Cecilia and Robbie have sex there because their sex lives are circumscribed by social convention, so if breaking the rules they may as well do so in the most improbably place.

As the film ends, the viewer curses Briony and the Germans for keeping the two lovers apart. Its opening scenes have been praised for evoking a pastel-coloured vision of Edwardian England, a place that exists only in storybooks. It glosses over the social history Christie had lived through. And for that, it is a much lesser film.