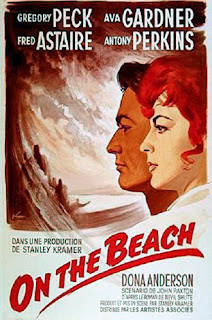 In both its dialectical best and manipulative worst, cinema has powerful emotional capacity. But the ability of film to provoke emotional insensitivity is also remarkable. We've become so familiar with nuclear Armageddon on screen that we rarely think about what it means - the portrayal of a world in which billions have died. While the death of Bambi's mother can break the coldest heart, the destruction of Los Angeles (and its 13 million people) isn't tragic in Roland Emmerich's 2012. It's exhilarating.

Stanley Kramer's On the Beach is one of the few films to attempt an exploration of the sadness of the final contention. His preachiness can be offputting, and the mushy plots of his end-of-career star-vehicles have occluded his reputation. But On the Beach is a film that deserves to be better known and more highly acclaimed. There are few better examples of Kramer's pathos and belief in the liberal conscience. Set aside your irony, your postmodernity and your scepticism, and this film will inspire you.

On the Beach is far from morbid. It is a study in the nobility of man expressed as an epilogue to his savagery. Plato divided the soul into thee parts - here, through Fred Astaire, Gregory Peck, Anthony Perkins and Ava Gardner, it fractures into many more. Comfort is sought in nihilism and fortitude, in sex and in alcohol, in the idea of a nation and in various ideas of the human. And towards the end in religion, but in one of its mildest, most contradictory communions. The diminishing crowds that meet for the Salvation Army's services in front of Melbourne's State Library of Victoria show us that the radiation cloud has finally reached humanity's final refuge.
Posted by Colin at 16:46