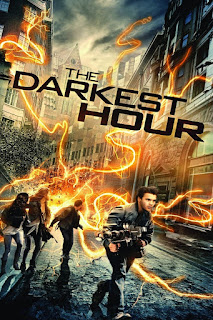 This blog usually argues that cinematic libraries and librarians are unrecognized visual tools, tropes and similes. But this interpretation has its limits. The energy-hungry alien invaders in The Darkest Hour are not actually a bold metaphor for capitalism, rapacious extractive industry, or the Russian petro-state. Nor is the Russian State Library the last bastion of civilization or a crucible of counter-insurgency - it is just a library. More precisely, the Lenin Library, as it's still universally known, is a Moscow landmark that must be ticked off this film's visual to-do list.

The Darkest Hour doesn't challenge the expectations of its Eastern or Western audiences. Despite its hedonism and syncopated Slavonic hip-hop, it presents a rather conservative picture of contemporary Russia. Metropolitan Russians are portrayed as brash, kooky and intelligent (their country still an axis of scientific and military power), and young Americans are shown the Moscow of their imagination, full of glamorous women, trendy bars, crumbling churches and grey apartment blocks. Basing a platoon of heavily-armed Special Forces in a library plays Russian muscularity off against besieged intellectualism, and the looming statue of Dostoyevsky by the library's door comforts hip Americans with the one Russian author they will claim to have read. The Darkest Hour is an enjoyable piece of escapism all the same, and a peek inside one of the great libraries Westerners are unlikely to be aware of.
Posted by Colin at 18:55