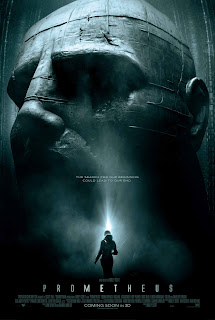 Easily the best thing about seeing Prometheus was passing Ken Loach on the stairs on the way up to the screen. I'm not going to talk about why I think Prometheus is so disappointing because, usefully, the spacecraft's library is microcosm of the film.

The cold and sexy capitalist (Charlize Theron) in charge of the mission has her own sexy and cold futuristic quarters with a Swarovski chandelier and Fazioli piano. One curved wall is covered with books whose spines face inwards.

The fashion for books as wallpaper is an old one, but the idea of turning the books backwards arrived in the style magazines found in airport frequent-flyer lounges only recently. It unwittingly mimics the shelving practice of many late medieval libraries, in which books were stored in this back-to-front way. But as Europe's monks eventually discovered, this is a thoroughly impractical arrangement for anything but a tiny library, and only makes sense if you never intend to read any of your books. It's an unintelligent aesthetic, and one that has been used to questionable effect by the British sculptor Rachel Whiteread in her Judenplatz Holocaust Memorial in Vienna.

In short, the library is an unresolved puzzle, stylish but confused, an unsatisfying postmodern simulacrum of its intellectual predecessor. Sound familiar?
Posted by Colin at 16:23