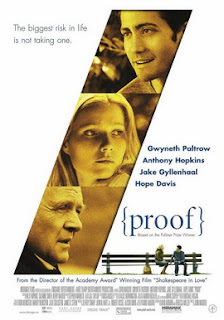 When not wasting my time writing about libraries and movies, I also write a little on classification theory. So I was pleasantly surprised to come across a film which combines these different interests, and hints at something I've long suspected - that Melville Dewey, in addition to being an anti-Semite and a misogynist, was an extraterrestrial.

In Proof, Gwyneth Paltrow plays a postgraduate mathematician who worries about inheriting her father's madness along with his arithmetical perspicacity. The audience is kept wondering, until the final minutes, whether the genius and madness are real, feigned, or imagined. Betraying the film's origins on the stage, the plot progresses through a series of scenes in which Gwyneth's odd behaviour and number-crunching abilities could be viewed as signs that she is either bonkers or brilliant, ingenue or fraud. An early ambiguous moment occurs at her father's funeral, when she interrupts Mozart's String Quartet No. 4 to deliver a bizarre eulogy:

He used to read all day. He kept demanding more and more books. I was getting them out of the library by the carload. There were hundreds. And then one day I realized he wasn't reading. He believed aliens were sending him messages through the Dewey decimal numbers in the books. He was trying to work out the code. 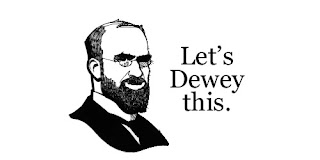 Despite being christened with an eminently sensible name (Melville Louis Kossuth Dewey), history's most famous classificationist preferred to be addressed as Melvil Dui. If that doesn't sound like a science-fictional name I don't know what does. As one enthusiastic astronomer has pointed out, the Dewey Decimal Classification scheme appears absurdly over-prepared for extraterrestrial encounters.

If you're really bored, there's an online version of Space Invaders which doesn't let you play unless you know your Dewey numbers.
Posted by Colin at 20:38