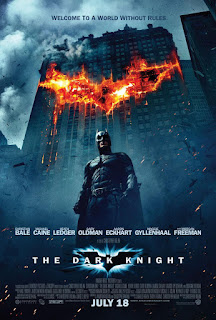 Batman comes out of retirement to battle the toughest bad-ass he's ever faced, the steroid-munching nihilist Bane, and his army of subterranean sans culottes.

Library-and-culture fans will find rich pickings in Gotham City. Libraries and librarians have appeared many times in Batman's comic-book adventures. In his ludicrous and parodic televisual existence, the caped crusader ("A Horse of Another Color") retrieved a priceless portfolio of famous umbrellas which had been stolen by the Penguin from Gotham City Library. Evidently taking inspiration from the flippered fiend, a week later (in "The Unkindest Tut of All") that monstrous monarch King Tut filched a set of scrolls from the same location. The American Library Association's sample policy document on how to handle law enforcement requests for library records uses the Gotham City Public Library as its hypothetical policy provider.

And then there's Batgirl, a fetching vision of modern female superherohood (see, for example, her federally-sanctioned campaign ad for equal pay between the sexes), daughter of Gotham's Police Commissioner, motorbike rider, and librarian. With remarkable prescience, in the same year as the invention of the World Wide Web she was, sadly, was transformed into the 'information broker' Oracle, when confined to a wheelchair following an attack by the Joker. The purple catsuit and crescent kicks returned with the launch of her own Batgirl comic in 2011, her PhD in librarianship now replaced by a bachelor's degree in forensic psychology.

The cinematic Batman has a library closer to home, and one that doesn't require incongruous exterior shots of the New York Public Library and a random shelf of books hastily cobbled together in Studio Nine of 20th Century Fox. As befits the resident of stately Wayne Manor, the Bruce Wayne of Christopher Nolan's recent trilogy has a study containing a gentleman's library of morocco-bound volumes. In the movies, no-one ever reads a book from a gentleman's library, and in any case Bruce doesn't have time for reading, being busy with business, charity, and crime-fighting. So he uses his books to disguise a hidden door, with his grand piano as a key. Playing an unmusical combination of notes on the latter triggers a mechanism in the former - behind a bookcase in Batman Begins and The Dark Knight Rises lies the entrance to the bat-cave.

No Gothic castle or haunted house is complete without a revolving-bookcase-leading-to-a-secret-chamber, so this parlour trick shouldn't work for postmodern audiences. Its familiarity and use by Buster Keaton meant that from an early date it couldn't really be taken seriously, and it has generally been confined to horror comedies (good examples can be found in The Cat and the Canary, Young Frankenstein, and The Addams Family). Variations include the revolving fireplace and the gag where two characters go back and forth and keep missing each other because they're on opposite sides, both used in Indiana Jones and the Last Crusade.

That Nolan gets away with filming a secret library door shouldn't surprise anyone who has followed the director's career trajectory from the gimmicky Memento to the mind-bending complexity of Inception. Nolan's Batman films are only superficially superhero movies - at a deeper level they're disguised existentialist essays and ever more ambitious experiments in subjecting audiences to tightly-constructed convolutions. Nolan's films reconfigure the fantastic as the everyday, and the everyday as the fantastic. He gets away with a secret revolving door designed into a bookcase for the same reason that he gets away with making a convincing hero out of an introspective billionaire who likes to dress up as a bat - he's a brilliant director. 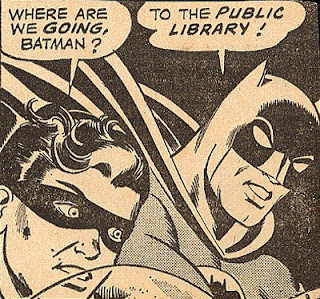 We're already primed to think of libraries as places of concealment, where objects (National Treasure; The Librarian), identities (Citizen Kane), and keys to secrets (all of the above; The Ninth Gate) are hidden. We also know them as places of revelation and exposure (Atonement; The Body in the Library), and part of what keeps us interested in the Bruce Wayne / Batman dichotomy is whether it will be revealed. We temporarily forget that bookcase doors are normally cheap jokes because the pace of the film doesn't allow us time to pause and reflect upon how ridiculous it is, because the mechanism for opening the door is original, classy and fun, and because our preconceived notions about libraries are already in sympathy what we see.

Though critics swooned at Heath Ledger's acting in the The Dark Knight, imagining something of his tragic death in the performance, for me The Dark Knight Rises is a better film. It is political and contemporary, ambitious and startling. I remain morally vexed by superhero movies, with their implication that ordinary humans lack the capacities to resolve humanity's problems. But The Dark Knight Rises is spectacular cinema, gripping drama, and a poke in the eye to populists, Occupiers, and Tea-Party loons who would dissolve the foundations of politics to reclaim civilisation, as though the roots of both words did not, in fact, mean the same thing.