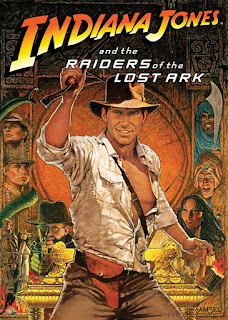 "The Bible speaks of the Ark levelling mountains and laying waste to entire regions. An army which carries the Ark before it... is invincible." The Nazis are in Egypt, on the verge of finding the Ark of the Covenant. Only one man can stop them.

70% of all archaeology is done in the library, apparently. So says Professor Henry 'Indiana' Jones, Jr. during his first cinematic outing.

Popular entertainment often works by inverting our expectations. Immediately after imparting the soundbite, Jones swaps his class of adoring freshers for a pair of G-Men. The dust-moted air of Yale is replaced by a snowstorm on the Tibetan plateau, where Professor Jones, transformed into the stubbled 'Indy', starts a barroom brawl with a gang of SS men. In movies, we expect the unexpected.

Some say that the Jones character was based on Robert John Braidwood. Others claim their own pet mid-century archaeologists active in exotic places as the maquette. In truth, a more significant influence on the script is the simple fact that a profession that spends its time in libraries, classrooms and muddy holes is an unlikely, and thus amusing, source for heroism. For the same reason, one reason why libraries work well in films is that in real life, paradoxically, nothing much ever happens in them. This is why most cinematic libraries bear very little resemblance to off-screen ones. They're not meant to. They appeal to day-dreams and the inverted worlds of the imagination.

It's also the reason why librarians shouldn't get too worked up about their cinematic depictions, positive or negative. These aren't real librarians after all. They are, to borrow a phrase from their greatest chronicler, reel librarians. Cinema is oversimplified and hyperdramatic reality. Indiana Jones spends little time kneeling in a shallow pit with a trowel. I have yet to see a film in which a librarian is shown creating a MARC record. That's okay. Films are not direct representations of any truth. And my fondness for the neorealism of New German Cinema aside, hopefully they never will be.