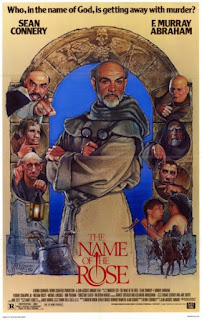 James Bond dons a monk's habit to investigate mysterious deaths in a fourteenth century Italian monastery. It turns out to be the fault of Aristotle, who had written about the subversive power of laughter seventeen hundred years earlier. The monastery librarian doesn't agree with the great polymath, and goes to great lengths to suppress the rediscovery of a lost text, bumping off a succession of grotesque brothers who have the combined personality of a logic textbook. Can Bond and his adoring young sidekick solve the mystery before the Papacy, Inquisition, monastery authorities, and all-pervading medieval miasma defeat them? Never fear, they have the power of literary theory of their side!

Umberto Eco's first novel transformed an obscure Italian professor of semiotics into an international poststructuralist superstar. Unlike Derrida, here was a European prof whose books you could actually read. Unlike Foucault, he didn't say awkward things about madness, imprisonment and sex, and unlike Deleuze his name was easy to pronounce and his ideas weren't so obviously loony.

The Name of the Rose (the novel) is a whodunit with extended digressions into metaphysics, the politics of the Avignon papacy, and the suppression of the Waldensian, Albigensian and Catharist heresies, among other obscurities. Its hero is the man Eco would liked to have been had he been born in 1275 - a learned, wise, liberal controversialist. Like Eco, Franciscan friar William of Baskerville prefers books to women and wine. Unlike Eco, he thrives on the border of respectability and radicalism. Does his name hint that, like a Sherlock Holmes story, the digressions provide a clue to the mystery? Or that, at heart, the novel is merely a silly adventure story? Or that Eco was showing what a genius he was, a dazzling Holmes to his readers' plodding Watsons? Why, all and none of the above. This is postmodernism!

A 600-page novel gives an author room to excurse on Aristotle's poetics, and lots of time for character-building and plot development. A novel provides space and time to build up an unfamiliar world. A film can do this too. One thinks of the tidy efficiency of Kurosawa's depictions of Sengoku-era Japan, or the Coen brothers' ability to evoke all that is necessary about rural Texas in five seconds of landscape.

But director Jean-Jacques Annaud is no Kurosawa or Coen. His film raises many more questions than it answers, and betrays the complexity of medieval Europe under an ever-present patina of mud, dusk and smoky grey.

The reason for the murders might make sense if you wrote your PhD on Thomas Aquinas (as Eco did), or to students of medieval textual transmission and historians of papal politics. After 600 pages of drip-fed Aristotelian propaganda, it may also make sense to readers of a sex-and-murder laced historical thriller. But it will not make sense to your average moviegoer.

The library and librarian are central to the plot. But little about them makes sense. Why is the library designed as a labyrinth, when the only two people allowed entry are the librarian and his assistant? How can a large scriptorium exist in an institution whose leadership promotes a policy of literary suppression? How can the monastery library be so famous when it is nearly impossible to access its books?

As the only mainstream film I know of with a concern for monastic libraries and the process of medieval manuscript production, The Name of the Rose has done much to propagate historical falsehoods. Nearly everything we see about the production, circulation and storage of texts is inaccurate for a fourteenth-century monastery. The 'manuscript adviser' named in the credits is an illustrator of children's books. Monks transcribed books (in their cells, not in libraries) in order to better learn their contents - they did not spend their days drawing pretty pictures for the hell of it.

What we're left with is confusion designed as clever provocation, a Hardy boys television mystery with some big-name actors. We get intellectual pretensions, naked girls and chubby monks, and trite banalities of medieval life. Despite all the theatricality, this is a poorly-paced and lazy film, which raises some interesting questions, only to answer none of them.