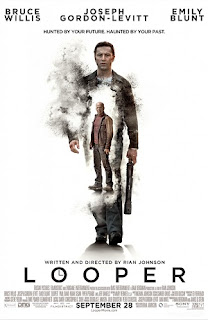 Paradoxes are arguments that produce logical inconsistency. They're a good way of demolishing bad thinking, but some paradoxes remain problematic even when the smartest heads try to resolve them. After 2,500 years, philosophers are still trying to figure out how the sentence 'this statement is a lie' can be neither true nor false. Mathematicians puzzle over a number of internally consistent logical puzzles that yet appear to be self-contradictory.

Contemporary physics has answers to this paradox, among them the wonderfully named Novikov self-consistency principle, the Huggins displacement theory, and Brane cosmology.

Time-travel films generally attempt to respect these scientific responses and aim at internal consistency, or neglect considerations of consistency altogether. Looper tries to do both things at once. Altering the past changes the future if it's convenient for the plot. What appears to be a clever, idiosyncratic and original ending, in which the film's hero works out a way of breaking the endless repetition of two destructive life-cycles, actually turns out to undermine the entire story by preventing the possibility of it ever having taken place.

To be fair, Bruce Willis warns us half-way through: 'I don't want to talk about time travel, because if we start talking about it, then we're going to be here all day talking about it, making diagrams with straws.' Fans of the brief-library-visit-as-harbinger-of-trouble scene will also have noticed Willis' impossibly convenient break-in to an unconvincingly futuristic public library. Unfamiliar with thirty-year-old IT, he still manages to look up private medical records, cross-reference the individuals using some kind of residency database, and print off giant maps of their present location, before escaping undetected into the Kansas night. In the highly-surveilled future, it's impossible to do anything without the powers-that-be noticing, unless a convoluted way needs to be found of ensuring that the leads be brought together for the final gunfight. Call it the paradox paradox genre - a film that uses paradoxes to drive and demolish the plot.
Posted by Colin at 16:10