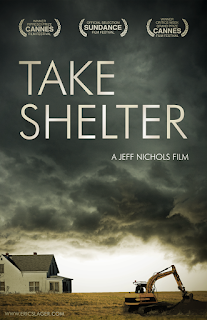 There's a predictable inevitability to Take Shelter, a film about the slow unravelling of a man's life. He has a job, a family, a truck, and a best friend, but he's plagued by prophetic visions of an apocalyptic storm. If this makes Take Shelter sound dull, hackneyed, and crushingly banal, it overlooks the fact that great films don't need explosions, chases, sex scenes and heavy weaponry. They're often about ordinary people facing something extraordinary.

The performances are compelling. Michael Shannon is magnificent as the troubled working class hero, his physical solidity and mental trauma filling the screen like a sleeping lion. Also remarkable is the film's everyday approach to madness, which in cinema is usually either a given (most horror films), or its development is purely exterior (e.g., The Shining). Take Shelter asks what it would be like for a good man to worry about the collapse of his mental health. It wonders what a family man might say and do if he thought he could no longer provide for his loved ones.

Shannon borrows books on mental illness from the local library to help work out what's happening to him. The heavy books suit his hands, which are made for building, not Googling, and removes him from the family home in order to set up an important confrontation. It's good to be shown that you can still find solid, readable medical literature in libraries, despite the shelves heaving with chick-lit and tales of military daring-do.

In a film which dramatizes potential, Take Shelter shows an actor (Shannon) and a director (Jeff Nichols) emerging as film people with a great future. Last year's Mud, with Matthew McConaughey, pulled them further into the limelight. A big-budget sci-fi project, with echoes of John Carpenter's early work, is next on the cards. I look forward to it.
Posted by Colin at 21:30