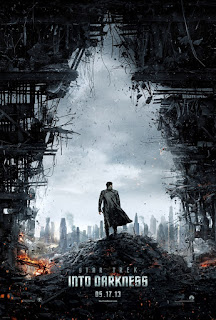 The Library of Alexandria probably wasn't burned down by a mob of intemperate Christians, the original Library of Congress probably wasn't the direct target of British pyromania during the War of 1812, and the recent panic about iconoclasm by Islamist radicals in Timbuktu led to much worrying, but few charred manuscripts. Though many libraries have been victims of war, I can't think of one destroyed by a deliberate act of terrorism. Librarians like to say that knowledge is power. If that were really true, surely more libraries would get blown up by those whose values are antithetical to our own?

A bomb in an archive sets up the action in the latest Star Trek film. Science fiction has often been a vehicle for investigations of knowledge and power, but not here. The pyrotechnics merely push the plot towards more explosions. Star Trek Into Darkness provides a sequence of interstellar detonations separated by winks, nods, buddy hugs, and gratuitous shots of Alice Eve's bosom.

In film, libraries often disguise something else (see my posts on the British Museum, Batman and The Librarian). The Kelvin Memorial Library hides a subterranean weapons facility, a cave full of spaceships directly underneath London that, somehow, remains secret. But then, not much in Star Trek Into Darkness makes sense. The suicide-bombing is carried out by a Starfleet officer to thank a villain who saved the life of his child. Only the anti-intellectualist Quarterback Kirk thinks it odd that someone would want to blow up what is nominally a library.

The destroyed archive is named for the USS Kelvin, the spaceship on which Kirk was born, shortly before his father died in battle. Relieved of his command, stripped of his rank, Kirk is reborn as a captain in this act of terrorism, which will lead to the death of his surrogate father. The layers of psychoanalytic convolution, plot circumlocution, and self-referentiality stopped me from enjoying the spectacle here. The neat shades of grey written for Benedict Cumberbatch are too simple for the actor's abilities. Triangulated between the comic book, the blockbusteringly nonsensical and the postmodernist reinvention, Star Trek Into Darkness falls into a black hole of its own making. It already feels time for someone to reinvent Star Trek again.