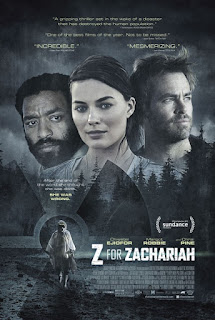 In cinema, we're accustomed to imagining the post-apocalypse world as one of chaos, darkness, noise. Is it ever daytime in Terminator? Does the sun ever stop blaring down in Mad Max?

Few filmmakers have wondered about the tranquillity of a world that lacked men and machinery. But then, stillness is difficult to convey in film, and is best portrayed when it seems like a contradiction: Toshiro Mifune at the start of The Bad Sleep Well, Ryan Gosling at the end of the otherwise frenetic Drive.

Z for Zachariah is a study in sexual tension and menace, but also of gentleness and solemnity. The film divided critical opinion. The title hints at allegory, both in its eponymous reference to prophecy and divine omniscience ('Zechariah' means 'God remembered' in Hebrew), and also, perhaps, in its echo of Costa Gavras' ponderous Z, a film saturated with hope, threat, and dread. The critics weren't sure what Z for Zachariah was really about.

But what if the disappointed critics were searching for something that just isn't t there? Though it raises questions about race, class, faith and gender, the film's answers are, at best, indefinite. The moral quandary at the film's centre, which resolves the love triangle, turns on an action we never see. It transforms each of the characters in a purely interior way. Perhaps a story of three people struggling to survive is just a story of three people struggling to survive. Perhaps they don't have to stand for anything; perhaps they're interesting enough in themselves?

In the opening scene, we see Margot Robbie, who still thinks she's the last person alive in the world, wandering through a half-destroyed town in a home-made hazmat suit. Her valley farm has somehow escaped the radioactive catastrophe, but lacks vital supplies and, as we later discover, is supplemented with the pick of the town's library books.
Posted by Colin at 18:14